Today a group of my garden peeps from both Barrack Heights and Albion Park community garden went on an adventure to harvest some bamboo.

However, a few of us got distracted by the mulberry trees and that was it…….fair share for all, fair share.

As we were gathering and eating we reminisced about our childhoods. My Granny had a huge mulberry tree at the house by the river and another near the railway track. I have delightful memories of gorging on the fruit, climbing the tree and getting messy.

This made me think of how times have changed and children today have less access to this type of experience. This moves me to want to create memories for today’s children.  When this generation of children grow up, I want them to have memories that connect them with nature. I want them to experience the simple joy of what we did today. I want to leave a legacy.

Richard Louv is a great advocate for this kind of thing and it was after viewing one of his lectures that compelled me to get involved with Barrack Heights Community Garden. I’m so glad that I followed that prompt as it has changed my life in ways that I could never have imagined.

So here’s to taking action to create wonderful memories for tomorrows adults and a future where nature is valued as it should be.

Oh yes, this is a selfy of me gorging on the mulberries!!!

The red radio that is on the top shelf belonged to my paternal Grandma and the canister’s that are below were bought at a garage sale for $3 and they remind me of my maternal Grandmother (Granny).

Both of my Grandmothers have passed away and they have left some great memories behind. Both Grandma’s were creative and I’m sure they have passed their talents to us.

My paternal Grandma, Thelma, was an artist and writer. Just recently I saw one of her paintings still on the wall at the primary school in Minnamurra. Even more recently, one of my cousins told me that she used to make teepee’s (is that where I got it from?). My Grandma taught me how to knit and for my son, knitted that very last piece before she passed away. Grandma  pursued many different creative activities and seemed to really enjoy doing so.

My maternal Grandmother, Granny Rita, was hilarious and quick-witted. She was in the army at war-time and taught us many army ditties. She too was a bit of a writer and would write little poems in cards for birthdays. They were always funny ditties. Granny had bad arthritis but only complained when it was about to rain “Arthur’s  playing up, think it’s going to rain”. She was also an avid reader like myself and we kind of had our own little book club as we would talk about what we were reading.

This is such a big topic that I think it needs a category of its own as I take myself down memory lane skipping delightfully with nostalgia gracefully beside me.

For me right now I’m having a bit of a 70’s music flash back, as on telly two different TV networks are promoting two shows that come from that decade.

When I hear these songs it takes me back to my childhood when I thought the world was kind and innocent. I  had no responsibly and I could play for hours outside with not too many worries. I was free to my imagination and dreaded the thought of ever growing up, as adults were boring people who sat around talking and having cups of tea all day!!

The funny thing about nostalgia is that you tend to forget the bad stuff that happened. When you’re a child many things are missed and perhaps the world is just as bad now as it was then.

Nostalgia will never go out of style while there are people like me who go…..arhh remember that!!

Last week I joined my cousins as they scattered the ashes of our Grandparents and their Mother in the place where we grew up by the side of the river. Many memories were shared as we all had  stories of this place and of course a relationship with those who have since passed away. 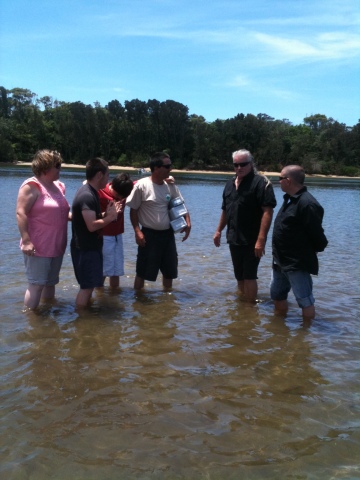 I mentioned in a previous post of how when Richard Louv was describing his special place as a child it brought back my own memoires of my special place . Well this is it, My Grandma had a house that was right by the river and when we went to Dad’s once a fortnight this became our back yard. 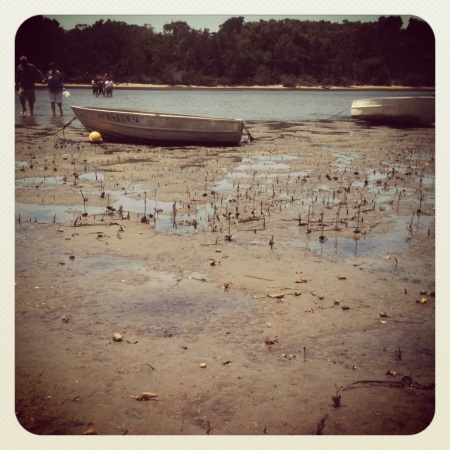 When the tide was out I would just wander about on the squishy sand and when the solder crabs were running about I would be fascinated by them for hours. The sound they make is like a scratchy sound and when you run towards them they scatter and hide away in the sand. The aftermath of the solder crabs is a wonderful sight and you can see their result when the sand has tiny little balls of sand on it’s surface. I particularly loved the baby soldier crabs and would let them crawl on my hands to tickle me. 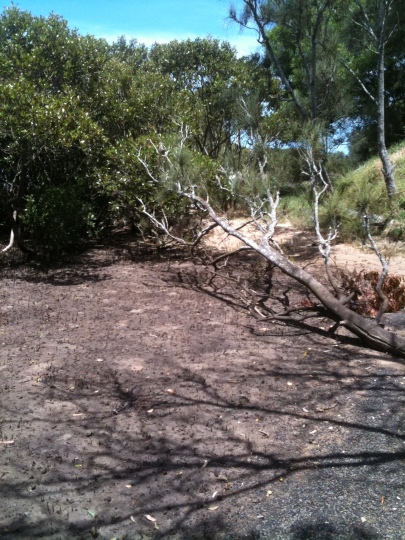 Back in the day, You know?? In the 70’s we were allowed  to explore our environment without the fear that exists today. There were  many places to explore by the river and it was like a massive mansion that needed to be  inspected. We played in the mangroves and I had a special mangrove tree that was my house and mine alone. My brother had his tree and the girl who lived a few doors up had hers. My tree house consisted of three stories and a lab on the ground level. Why I had a lab??? I don’t know!! It just had a lab!!! I would make myself comfortable on the third story and pretty much look over everyone, as you do. The view was great and I had a special technique of how to climb to the top story and how to sit elegantly on the branch when I got there. Life was good when I was a kid!! 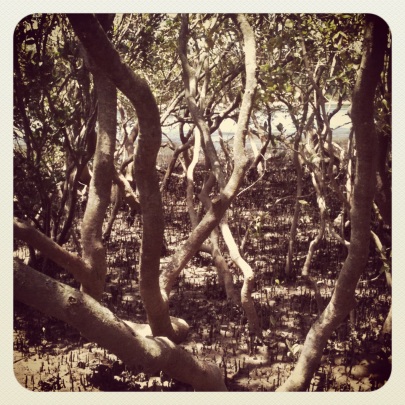 From the house(meaning Grandma’s house, see picture below) you could see this lovely view and all seasons would provide an aesthetic pleasure. Across the river to where the trees are is a long strip of bush land that runs parallel to the river and beyond them  is a beach. Often we would get in the tinny to cross the river and few times we got to camp on the other side. That is yet another world that was waiting for exploration in which we were able to as we got older.

I remember one time when our cousins were over on a particular weekend, we asked Dad if we could use the boat and he agreed but said “whatever you do, Don’t lose the rollicks!!” So of we go for an adventure across the river in a tinny boat. We had so much fun that day and in order to not lose the rollicks we hid them, but unfortunately they were hidden too well!!! Where are they??

Lets just say, rowing the boat back home was not as easy as it was at the start of our adventure and I can’t recall what Dad said???? Oops!!!! 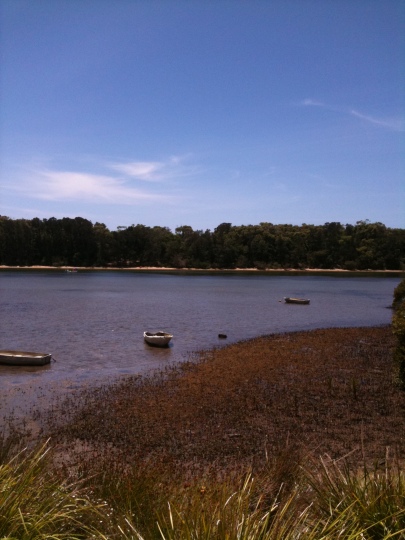 In this last photo you may be able to spot a dead log and I don’t mean the one in the foreground. It’s between the mangroves and the river bank.  Well that old log was our pet dinosaur that took us on many adventures and rides. Its name, affectionately given by the girl from a few doors up was called Summer. 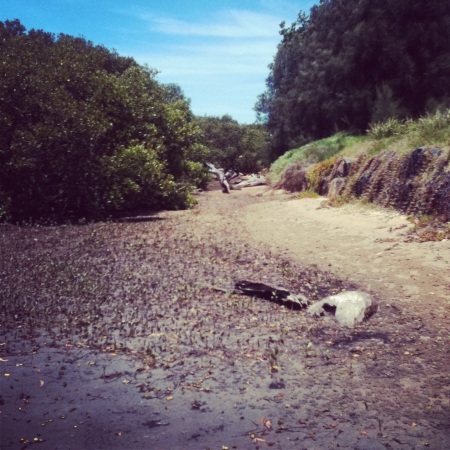 Well this has been memory lane for me and it’s only a very small part of a big story.  I’m sure once I post this I will say to myself “What about that memory?? I forgot to mention this!!!!

May I conclude with how  My Granny from mum’s side of the family had a house further up the river too!!!!  Perhaps to remedy this I will have to write more.

This is the river entrance to the place where I grew up.

It’s a place of happy memories

With much swimming in the river and walking around the headland.

It’s my special place shared by many other’s, no doubt!!!! 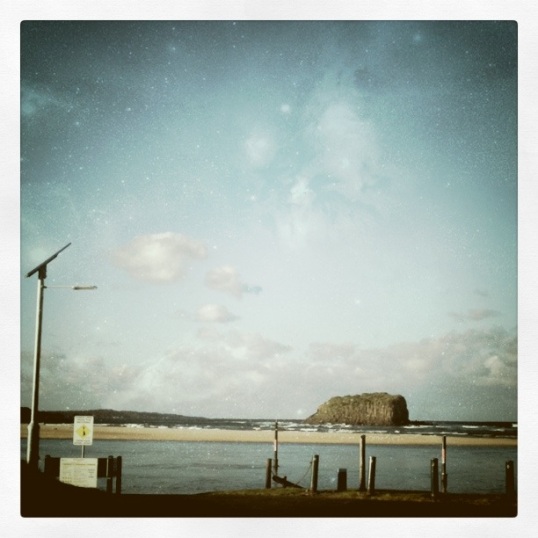 Suburbia and it’s images evoke such deep emotions in me. I paint suburbia, take photo’s of it, for goodness sake I even blog about it. Has it to do with where I grew up? As I  walked out my front door and everywhere I went I was confronted with such scenes. 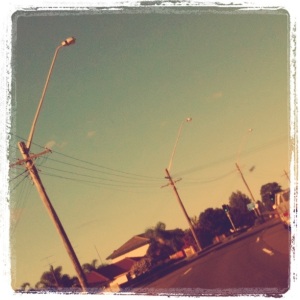 There is a certain nostalgia that creeps in that makes me think of my childhood that was well and truly marinated in most exciting decade ever, the 70’s. When I was a kid you played with the neighbourhood kids and came home when the street lights came on. I remember all us cousins in the back of my Aunty’s station wagon singing ABBA songs at the top of our lungs. and when I say back, I mean back- back without any seat belts on.

I then wonder, was life more simple then or when  nostalgia strikes does it block out the nasties? I ponder this a lot as I’m calving through my 30’s almost reaching 40. I don’t really care about getting old as I still feel quite young. I think that as a child, images stay with you in such a strong way that they are not easily shaken.

So rather than question it I’m just going with it. I will indulge this need to capture suburban images for as long as I so feel the need to do so. I will allow my childhood memories to fuel my creativity, which hopefully produces emotive works of art. 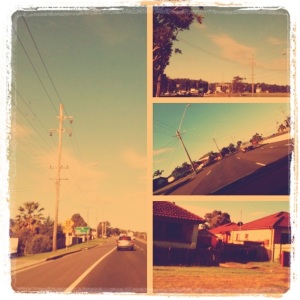